Home » Definitions » Who Is Israel? Who Are the Jews?

Who Is Israel? Who Are the Jews? 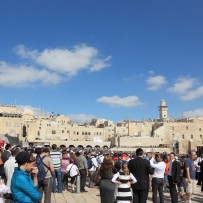 Many people think of “Israel” and the “Jews” as being the same group of people, but in reality, the Jews are just a small segment of the larger group of people God called Israel.

Jacob was the son of Abraham whose name was changed by God to “Israel,” which means “prince of God.” He had twelve sons.

Judah was one of the sons of Israel, and his descendants became known as the tribe of Judah.

Judah is also a name collectively given to two southern tribes of Israel (Judah and Benjamin, as well as some of the tribe of Levi). These tribes were carried away to Babylon in 586 B.C., then restored back to their land 70 years later, only to be dispersed throughout the world after the fall of Jerusalem in AD 70. They are known as “Jews.”

The sceptre shall not depart from Judah, nor a lawgiver from between his feet, until Shiloh come; and unto him shall the gathering of the people be. (Genesis 49:10)

And David [from the tribe of Judah] perceived that YHVH had established him king over Israel, and that he had exalted his kingdom for his people Israel’s sake. (2 Samuel 5:12)

He also exalteth the horn [a ruler] of his people, the praise of all his saints; even of the children of Israel, a people near unto him. (Psalm 148:14)

10 And in that day there shall be a root of Jesse, which shall stand for an ensign of the people; to it shall the Gentiles seek: and his rest shall be glorious.

11 And it shall come to pass in that day, that YHVH shall set his hand again the second time to recover the remnant of his people, which shall be left, from Assyria, and from Egypt, and from Pathros, and from Cush, and from Elam, and from Shinar, and from Hamath, and from the islands of the sea…

16 And there shall be an highway for the remnant of his people, which shall be left, from Assyria; like as it was to Israel in the day that he came up out of the land of Egypt. (Isaiah 11:10-11, 16)

The New Testament records that Jesus was the Messiah that the prophets foretold.

And thou Bethlehem, in the land of Judah, art not the least among the princes of Judah: for out of thee shall come a Governor, that shall rule my people Israel. (Matthew 2:6)

68 Blessed be YHVH God of Israel; for he hath visited and redeemed his people,

69 And hath raised up an horn of salvation for us in the house of his servant David;

70 As he spake by the mouth of his holy prophets, which have been since the world began:

71 That we should be saved from our enemies, and from the hand of all that hate us;

72 To perform the mercy promised to our fathers, and to remember his holy covenant;

73 The oath which he sware to our father Abraham,

74 That he would grant unto us, that we being delivered out of the hand of our enemies might serve him without fear,

Paul tells us that the Messiah would reign not only over Judah and Israel, but over all the nations of the world.

8 Now I say that Jesus Christ [Christ is the Greek translation of Messiah] was a minister of the circumcision for the truth of God, to confirm the promises made unto the fathers:

9 And that the Gentiles might glorify God for his mercy; as it is written, For this cause I will confess to thee among the Gentiles, and sing unto thy name.

10 And again he saith, Rejoice, ye Gentiles, with his people.

11 And again, Praise the Lord, all ye Gentiles; and laud him, all ye people.

12 And again, Esaias saith, There shall be a root of Jesse, and he that shall rise to reign over the Gentiles; in him shall the Gentiles trust.  (Romans 15:8-12)

So as we read the Bible, we need to be careful to note when Scripture says “Judah” or “Jews,” and realize that this is not always referring to the entire nation of Israel.

Israel (Jacob) blessed Joseph’s two sons, Manasseh and Ephraim, before his death. Ephraim was the younger son of Joseph, predicted to become greater than his older brother Manasseh. His descendants would become a multitude of nations.

Ephraim is often another name for the ten northern tribes of Israel, which were dispersed throughout the world because of their disobedience and idolatry. The prophets often referred to as “Israel” or “Ephraim” interchangeably.

For the head of Syria is Damascus, and the head of Damascus is Rezin; and within threescore and five years shall Ephraim be broken, that it be not a people. (Isaiah 7:8)

Ephraim, he hath mixed himself among the people; Ephraim is a cake not turned. (Hosea 7:8)

The people of the ten northern tribes of Israel mingled so much with the Gentile nations around them, gradually intermarrying and scattering further abroad, that in a short time, no one could distinguish them from the nations. It was as if they were no longer God’s people. They were, for all intents and purposes, Gentiles.

Note what God said, however, through the prophet Hosea.

9 Then said God, Call his name Loammi: for ye are not my people, and I will not be your God.

11 Then shall the children of Judah and the children of Israel be gathered together, and appoint themselves one head, and they shall come up out of the land: for great shall be the day of Jezreel. (Hosea 1:9-11)

This adds a lot of meaning to what Jesus said.

I am not sent but unto the lost sheep of the house of Israel. (Matthew 15:24)

And Jesus said unto [Zaccheus], This day is salvation come to this house, forsomuch as he also is a son of Abraham. For the Son of man is come to seek and to save that which was lost. (Luke 19:9-10)

12 How think ye? if a man have an hundred sheep, and one of them be gone astray, doth he not leave the ninety and nine, and goeth into the mountains, and seeketh that which is gone astray?

13 And if so be that he find it, verily I say unto you, he rejoiceth more of that sheep, than of the ninety and nine which went not astray.

14 Even so it is not the will of your Father which is in heaven, that one of these little ones should perish. (Matthew 18:12-14)

At the time of Jesus, very few of the people of the northern tribes had returned to Israel. Most were scattered among the Gentiles, seemingly lost. However, all twelve tribes of Israel — not just Judah (Jews) — were very precious to God. Even though they had sinned, the Messiah said that He came to rescue and redeem them.

And I will make them one nation in the land upon the mountains of Israel; and one king shall be king to them all: and they shall be no more two nations, neither shall they be divided into two kingdoms any more at all. Neither shall they defile themselves any more with their idols, nor with their detestable things, nor with any of their transgressions: but I will save them out of all their dwelling places, wherein they have sinned, and will cleanse them: so shall they be my people, and I will be their God (Ezekiel 37:22-23).

Contents of This Page